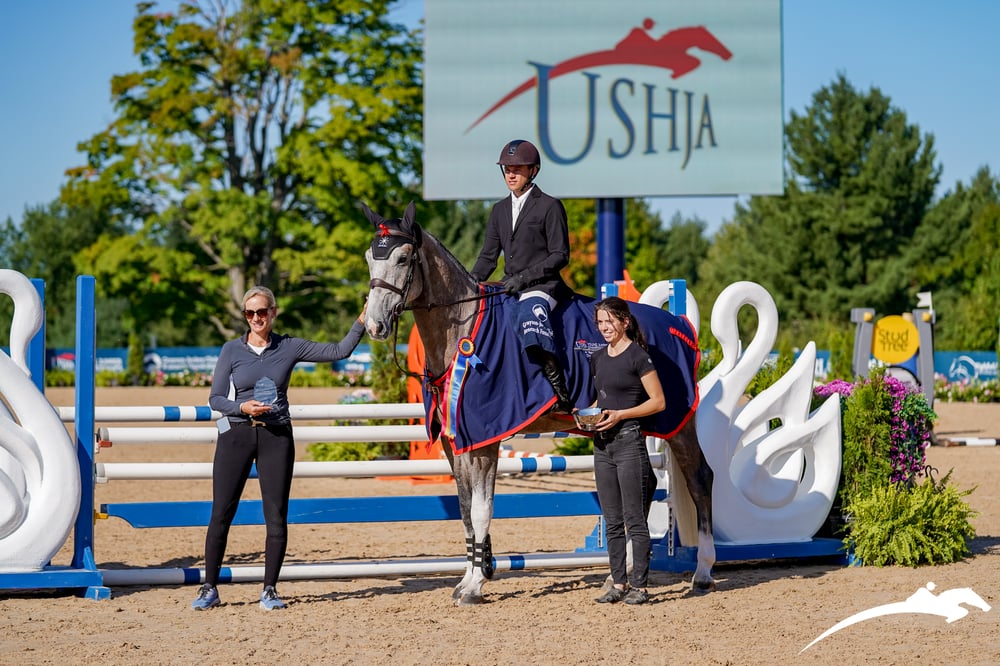 The first champion and Best Young Horse to be crowned was Nacho (Berlin x Jabiola), bred by A.C. Smolders and owned by North Star. Aaron Perrin, of East Aurora, New York, rode the KWPN gelding to the top of the standings in the .90m First Qualifier on Wednesday and secured their position on top in Thursday's Final set at .90-1.00m. Based on jumping penalties and style points over both rounds, the Style & Jumping Competition saw the duo finish with a score of 130.50, five points ahead of the next closest competitor.

"He’s got a great way of jumping, he’s got a very good brain, he’s careful, he’s got a good canter, and he really likes the work," said Perrin of his winning mount. "He’s really starting to develop now and has started to get a lot stronger. He still has a bit to go, but I think he is going to be a very good horse next year and the year after; hopefully he'll be a top horse." The 5-Year-Old competition saw the first jump-off of the Championships after Lisa Goldman-Smolen on Romeo B and Jill Gaffney on FF Mister Gold finished the two qualifiers and Sunday's Final Round fault-free. Competing at 1.20m, the shortened course ended with Romeo B (Heartbreaker x Fiona B), a Belgian Warmblood stallion, claiming the championship tricolor and Best Young Horse with yet another clear round, making him the only 5-year-old clear from start to finish. As owner and rider of the stallion bred by Bannockburn Farm, Goldman-Smolen, of Hawthorn Woods, Illinois, also collected the Best U.S. Bred Horse honors.

"I've had [Romeo B] since he was three. He's probably the horse I'm most excited for; I think he is one of the best horses I've ever sat on. I'm really excited for the future with him," said Goldman-Smolen. "I've brought a lot of horses up through the young Jumper ranks and am a big proponent for U.S. breeding. It's exciting bringing them long and showing that we have just as much talent here as they have [in Europe.]"

Competing in two qualifying rounds, then a Final Round set at 1.30m, two horses completed the 6-Year-Old Championship free of faults, leading to another jump-off on Sunday. Kelly Soleau-Millar and Fire Fly went head-to-head with Flury and Q7 Munny over the short course and came out on top. Soleau-Millar, of Wellington, Florida, and the KWPN mare (Arezzo VDL x First Price G) owned by M. Michael Meller edged out Flury's time by just .397 seconds to win the Championship and Best Young Horse honors.

"I think this is my fourth show with [Fire Fly] and I just love her. She's such a little fighter and she goes into the ring every time and wants to win," said Soleau-Millar. "I have a 3-year-old homebred that we just sent to get broke a couple weeks ago and I hope to have him here next year for the 4-year-olds." 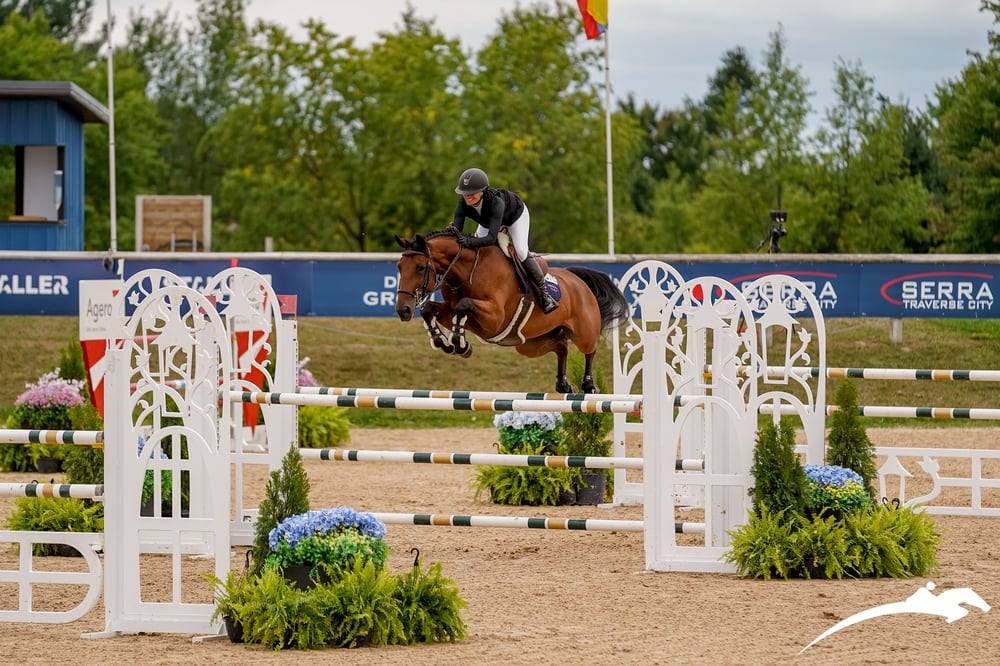 The only pair to complete the 7-Year-Old Championship fault-free was Victoria Ketchum and Patience Van Den Dries. The Wellington, Florida, rider and the Belgian Warmblood mare (Thunder Van De Zuuthoeve x Ulive Van’t Zorgvliet) owned by Copperline Farm LLC and bred by Dirk Van Aken entered the 1.35m Final with no faults in the two qualifying rounds and kept that streak going through the Final, finishing the week on zero faults to earn the top honors and Best Young Horse.

"She's a total machine. She has so much scope and such an amazing brain," said Ketchum. "I was really trying not to think too much about [a clear round] and trying to streamline my thoughts. It's just another round. I just tried to stay calm, breathe, let her do her thing and support her where I needed to.

"This is my first time really developing a young horse," she continued. "I did the [Developing Jumper Series] at WEF in March which was really fun and she was still quite green. She's still green now but she's come so far over the summer so I was really excited to let her showcase herself and really rise to the occasion." 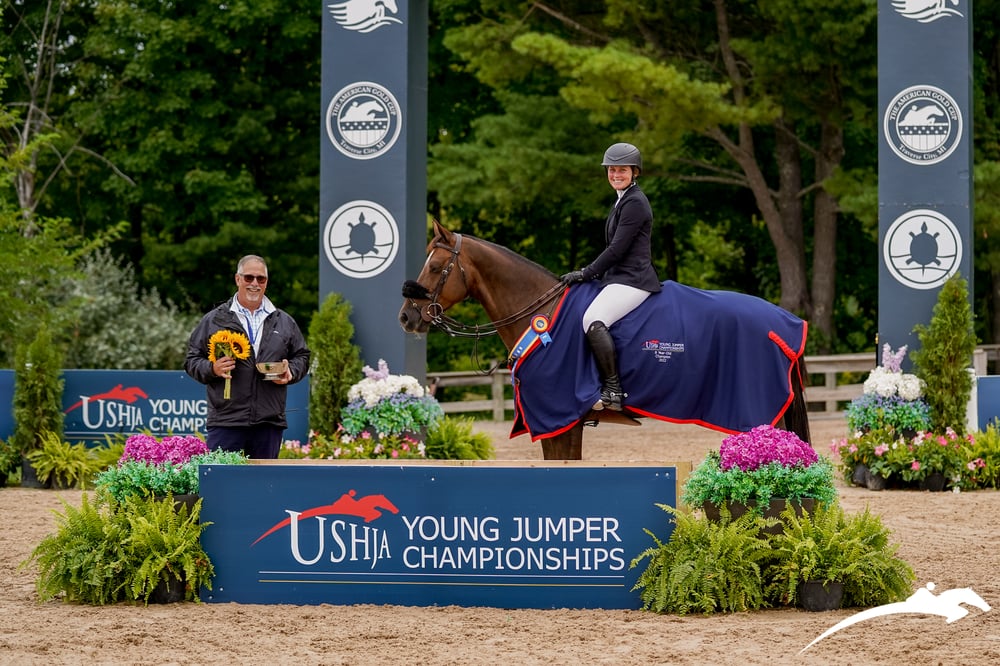 Rounding out the Championships were the 8-Year-Old competitors in their 1.40-1.45m Final where again, only one pair completed all three rounds free of faults to claim the top spot. Callie Schott, of Wellington, Florida, and Southern Arches, LLC's Ironix (Curby Du Seigneur x Diaxa Du Seigneur), a Belgian Sport Horse gelding bred by S.A. Seigneur, were that impressive duo, also earning the Best Young Horse award.

"Most of my best horses have been developed through the years. I have a big interest in it because I love trying to find the next superstar and trying to bring them along and figure out each one," said Madden, who announced in 2020 that she would be stepping back from the top of the sport to develop horses and riders. "I think this program with the USHJA is really helpful." 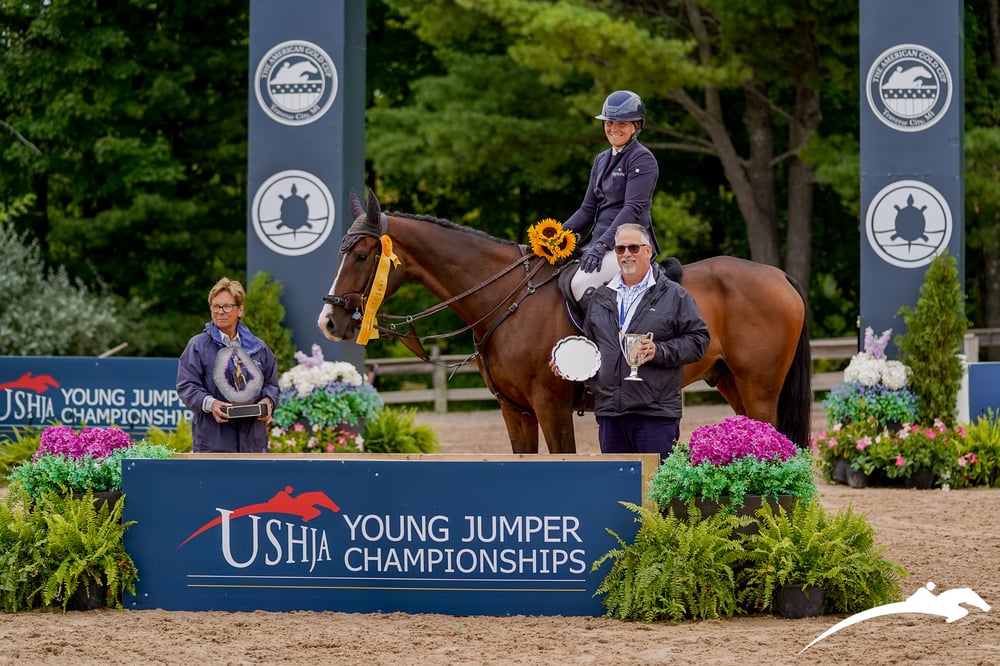 The USHJA Young Jumper Championships serve as the national championship for young Jumpers in the United States, allowing talented prospects to be showcased by owners, breeders and riders and shown at the national level. The competition offers separate Championships for 4-, 5-, 6-, 7- and 8-year-olds. Four-year-olds compete in a Style and Jumping Championship, which includes a First Qualifier and Final set at .90-1.00m. Five- through 8-year-olds compete over a three-round format that features First and Second Qualifiers and a Final set from 1.20-1.45m based on each age section. A Consolation Classic is offered for horses not competing in the Final. In addition to prize money through tenth place, incentives and bonus prize money is offered for United States breeders and American-bred horses.