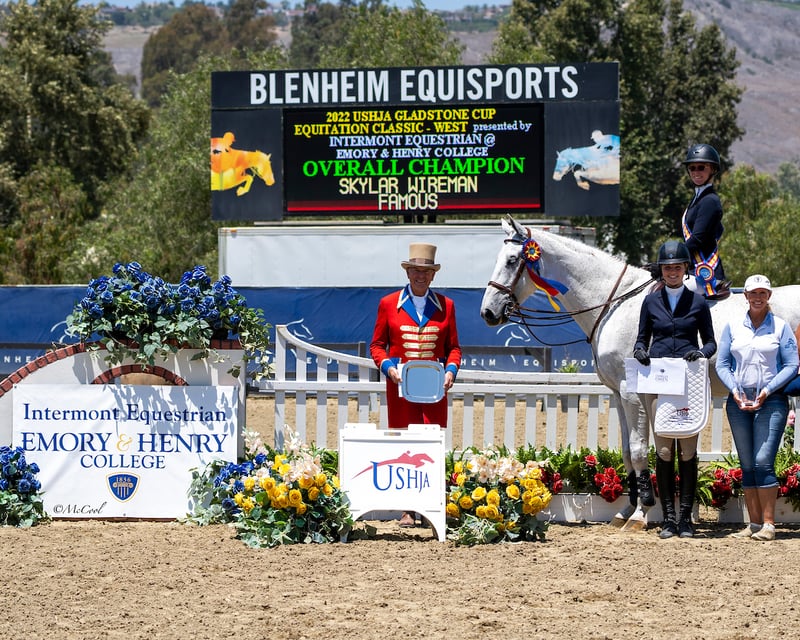 Of the 37 horse-and-rider combinations that took to the Classic Hunter Round, Walkenbach, of Paradise Valley, Arizona, took the lead midway through the order with a score 97 on Elvenstar Farm's Let's Go. Then, just a few trips later, Wireman, of Bonsall, California, stole the show and posted the highest score of the class, an impressive 98, aboard MKT Investments LLC's Famous.

The top 20 riders then returned in reverse order for the Handy Hunter-style course. Rising from seventh to finish the second round in third, Primavera, of Aptos, California, rode her own Carrico Sun to an 88, bringing her overall score to 173. The 2019 EMO Insurance/USHJA 3’3” Jumping Seat Medal Final Champion, Nicole McMillion, of Huntington Beach, California, rose from eighth to sit in fourth with a 171. Stella Buckingham, of Los Angeles, California, slid to fifth with a 170.5 overall, and Mackenzie Greer, of Newport Beach, California, sat in sixth on a 168. The final riders to take to the course, Walkenbach added an 86 to her first-round score to remain in second with a 183 total and Wireman's 97 securely kept her in the lead with a 195 overall.

"In the first round, I thought it was a pretty nice Hunter course, and I put in a nice smooth trip for myself. For the Handy, I figured just lay down another solid round and stay towards the top for the final test. There were a couple tight inside [turns] I didn’t take because it wasn’t worth the risk," said Wireman of her first two rounds.

The top six were then called back to trade mounts for the final round, where the bottom three shuffled and the top three held their places on the leaderboard. In the end, Wireman and Walkenbach swapped horses but not places, remaining first and second through the entirety of the Classic. Primavera also held onto her spot, finishing in third after a round on McMillion's mount, Copenhagen. Buckingham rode Greer's Hollywood, finishing fourth, while Greer's course on Ingenium Farm's Vondel DH Z, Buckingham's mount, put her in fifth. McMillion rounded out the top six after her efforts on Primavera's Carrico Sun.

"It's a pretty unreal feeling being the Champion. It's been around a long time and it’s a pretty big event. Last year I was second, so I was close. But to get the win this year, my final Junior year, it’s a good feeling going into medal finals this year," said Wireman.

"Famous used to be a jumper and now does the equitation," she continued, of her mount. "I have been riding him about a year. He came to me as a catch ride last year and we ended up with him in our barn. He has become quite the equitation superstar. He's a lot of fun to ride. He knows all the tests and is very brave and has a huge stride. He's a lot of fun and gives you a good feeling."

As Champion, Wireman was awarded a $5,000 scholarship to Intermont Equestrian at Emory & Henry College, a Charles Owen helmet, a gift bag from Exhibitor's, a cooler, a saddle pad, a keeper trophy, and a rider sash. Walkenbach earned an Essex Classics gift certificate, a saddle pad, a gift bag from Exhibitor's and a rider sash as Reserve. The top 10 riders received sashes and saddle pads from USHJA along with gift bags from Exhibitor's. Earning the honor of Best Equitation Horse, Famous, owned by MKT Investments LLC and ridden by Wireman, received a CWD gift certificate and a trophy. 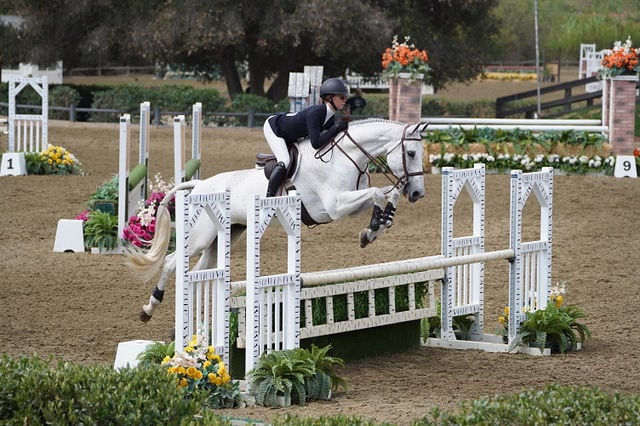 The USHJA Gladstone Cup Equitation Classic, presented by Intermont Equestrian at Emory & Henry College, is a three-round class that combines the precision of equitation and handiness of hunters over a course set at 3'6". Held during the East and West Coast Adequan/USEF Junior Hunter National Championships, the Gladstone Cup is open to any rider that is an Active USHJA junior member at the time of the competition and has won a USEF Hunter Seat Medal, ASPCA Maclay, USEF Show Jumping Talent Search, either phase of WIHS Equitation Classic at a National or Premier show or Overall WIHS Equitation Classic during the qualifying year.